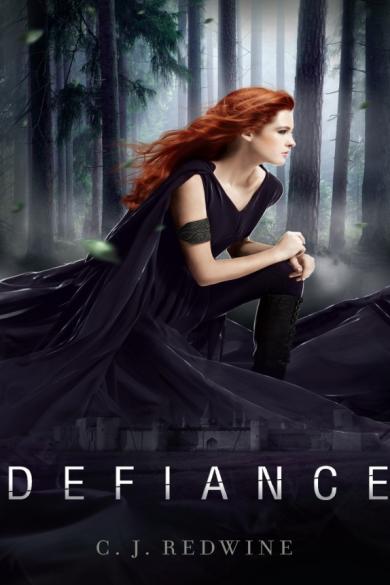 Defiance by C. J. Redwine is rich postapocalyptic YA fantasy perfect for fans of Graceling and Tamora Pierce.

While the other girls in the walled city-state of Baalboden learn to sew and dance, Rachel Adams learns to track and hunt. While they bend like reeds to the will of their male Protectors, she uses hers for sparring practice.

When Rachel's father fails to return from a courier mission and is declared dead, the city's brutal Commander assigns Rachel a new Protector: her father's apprentice, Logan—the boy she declared her love to and who turned her down two years before. Left with nothing but fierce belief in her father's survival, Rachel decides to escape and find him herself.

As Rachel and Logan battle their way through the Wasteland, stalked by a monster that can't be killed and an army of assassins out for blood, they discover romance, heartbreak, and a truth that will incite a war decades in the making....

4/5
I've owned this book for years and it just sat on my shelf. So glad I finally picked it up. I like books told with alternating narrators. Decent read. I'll read the next for sure.

5/5
C.J. Redwine sucked me into Defiance from the very beginning of the story. The plot is fantastic, and Rachel and Logan are great main characters. The attraction between the two practically leaped off the pages and they are both very action oriented individuals. From the moment we saw Rachel & Logan together, I knew they were going to be something special. It’s so awesome when a book has an epic romance—one that stands out and sticks with you despite the numerous books you might read afterwards. Rachel & Logan have that perfect combination of hesitation and compatibility that makes you wish every scene focused on their relationship.Aside from the awesome romantic duo, Rachel & Logan are pretty kick-ass people. They’re both brave and intelligent, willing to jump into danger to protect the ones they love and to fight for their beliefs. There was a ton of action in Defiance and it was all really well done. Logan’s inventions and innovative ways of getting out of trouble were truly outstanding. Between his brains and Rachel’s defiant personality, we will definitely be in for a treat in the future novels.Defiance is filled with action, romance, and amazing characters. The innovation and clever thinking from Logan makes the story fascinating and Rachel’s unconventional behavior adds a lot of drama to the novel. We could not have a more perfect couple than Logan & Rachel either, who provide a beautiful mix of innocence and danger into the romance of the story. Defiance is a stunning debut and I am truly looking forward to more from C.J. Redwine.

3/5
The TL/DR; 1) Started out slowly - very much so! About halfway through things finally got interesting. 2) That said, be prepared for a lot of waiting and prep. 3) There were a few things that happened that caused me to scratch my head and go, "but, wait, why?" 4) There are certain tech in this world that raised questions as to how they worked exactly and why they weren't mass produced. Getting into this would be a bit of a spoiler. 5) Overall, happy there was no love triangle, but I still found the overfocus on the romance distracting from the story. 6) One of the biggest problems that I had with this book is that, even though we have a strong female protag, when she's around other females, she doesn't seem to care to have relationships with them, they aren't very fleshed out. Actually, I found it a little concerning that when she met a brother and sister - who both seemed like potentially strong characters - we only get to see her interactions with the brother (potential love triangle setup??) than the other strong female. It left me wanting more. I picked this up because I was interested in another book by C.J. Redwine and wanted to see what her style was like, while I'm not sure I'll be continuing this trilogy, I'll definitely be reading The Shadow Queen.